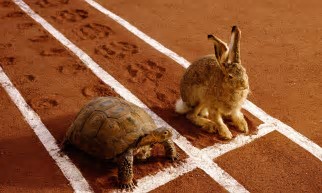 Many of you have heard of the fable, The Tortoise and the Hare.  In a recent conversation with my Generation Y mentee, I casually mentioned, “In my generation, we were taught that slow and steady wins the race.” “Not today!” she said with a quick and emphatic retort. Some of what she said and more of what she inferred told me that many just entering the workforce want it all and want it now. I must admit, I bought it.

Seeing her boldness and assumption of entitlement, I immediately (and secretly) began to second guess the old system of making small, consistent strides until you get there. After all, today we have social media and there are so many under 30 success stories that I thought maybe she was right. Maybe a shift to the ‘go big or go home’ mentality was just the catapult I needed.

Soon after this conversation, I began to run across article after article that argued one point and refuted the other. Finally, I stumbled upon a ToddHenry.com post that while arguing against one side, actually presented the best compromise to bridge the thinking between generations. In summary, the article gave a mixed portfolio of advice which included adapting parts of both doctrines. This felt right. It bore witness to my natural instinct to:

So, my mentee was right. Times call for bold and deliberate action. I was also right in being wise enough to know that we can’t apply one type of thinking to all situations. Whether you slow your pace deliberately to preserve your energy for the win or you blaze through full-speed astonishing all in your path, remaining steady should always be the end goal.

What thought-provoking conversations have you had recently with someone from another generation and what was your takeaway?